The Wright Brothers Collection (MS-1), housed in the University Libraries' Special Collections and Archives, is one of the most complete collections of Wright material in the world. It includes the Wrights' own technical library, personal library, and family papers, including letters, diaries, financial records, genealogical files, and other documents detailing the lives and work of Wilbur and Orville Wright and the Wright Family. It also includes awards, certificates, medals, albums, recordings, and technical drawings. Perhaps the most valuable part of the collection are the thousands of photographs documenting the invention of the airplane and the lives of the Wright family.

Digital images from the Wright Brothers Collection are searchable in CORE Scholar.

Information on image format, delivery, and fees is available in the Research Fees section on our Researchers and Students webpage. When submitting a request for Wright brothers images, please note the photo identifier number of the image as it appears in the keywords for that image on CORE Scholar keywords (for example ms1_16_2_8). This will ensure that you receive the correct image. 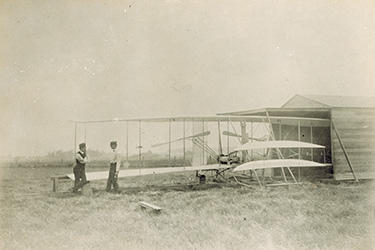 Over 2,000 photographs document the invention of the airplane, the lives of the Wright family, and the Wrights' flying exhibitions in Europe and the United States. The collection provides thorough coverage of the Wrights' early inventive period documenting their early gliders and flight testing in both North Carolina and Ohio. 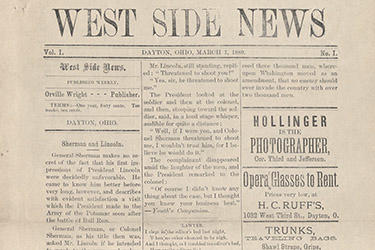 Newspapers published by the Wright Brothers, including The Midget,  West Side News, and  The Evening Item. The Wright brothers operated a printing business from 1889 to 1899, before they started their bicycle business, and before they tackled the challenge of flight. Over the years, they worked on several publications and local newspapers, including: The Midget, a small school newspaper; church pamphlets; the West Side News; The Evening Item; parts catalogs for bicycles; and the Dayton Tattler, published for neighborhood friend and noted poet and novelist, Paul Laurence Dunbar. 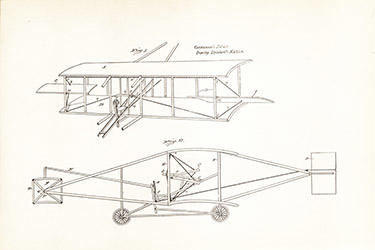 Patent trial transcripts  for the patent infringement lawsuits the Wrights filed against the Herring-Curtiss Company and Glenn H. Curtiss. They also filed suits not only in the United States but Europe as well. The Wrights also brought litigation against aviators such as Louis Paulhan from France and Claude Grahame-White from England. The documentation generated by the attorneys on both sides of these cases was voluminous, exhaustive, and complex. 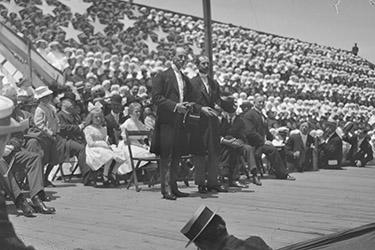 Homecoming celebration photographs taken in 1909 by Andrew S. Iddings (from MS-192). The city of Dayton, hometown of the Wright brothers, planned the culminating Homecoming Days Celebration for June 17 and 18, 1909. Although the Wright brothers were anxious to continue flight trials for the Army Signal Corps in Fort Myers, Virginia, they returned to Dayton and participated in the many events planned. 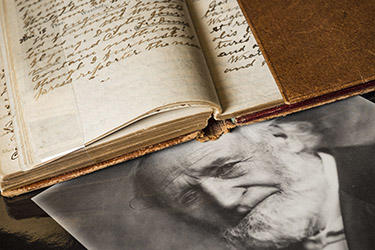 Milton Wright, a bishop in the Church of the United Brethren in Christ, is probably most famous as the father to aviation pioneers, Wilbur and Orville Wright. Though typically referred to as Bishop Milton Wright due to his devotion and involvement in the church, Wright was also a keen genealogist and a committed diarist. This collection of his diaries range from entries as a young man in 1857 until his death in 1917. Wright’s meticulous recording ran from the quotidian like the weather and tracking his expenses, to the extraordinary, like Wilbur and Orville’s first flight. The diaries provide a window not only on the achievements of his famous progeny, but his life and a record of life around the dawn of the 20th century.